A Timeline Of Greek Male Sculpture

Here is a timeline where I have chosen statues that I believe represent the evolution of the Greek male physical ideal. The statues chosen are all statues of real men or at least idealized men, never of gods. While this is by no means a complete history, I hope it will be useful in giving a general idea of the major developments in Greek male sculpture and showcasing the immense beauty the Greeks have produced.

In many cases, the original statue no longer exists, and an image of a copy is shown in its place. Copies have been denoted with (C). If you would like to know more about the particular copy, please visit the bibliography section of this site to see the images source. 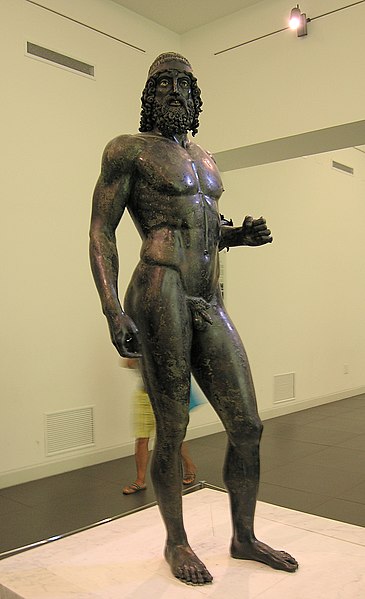 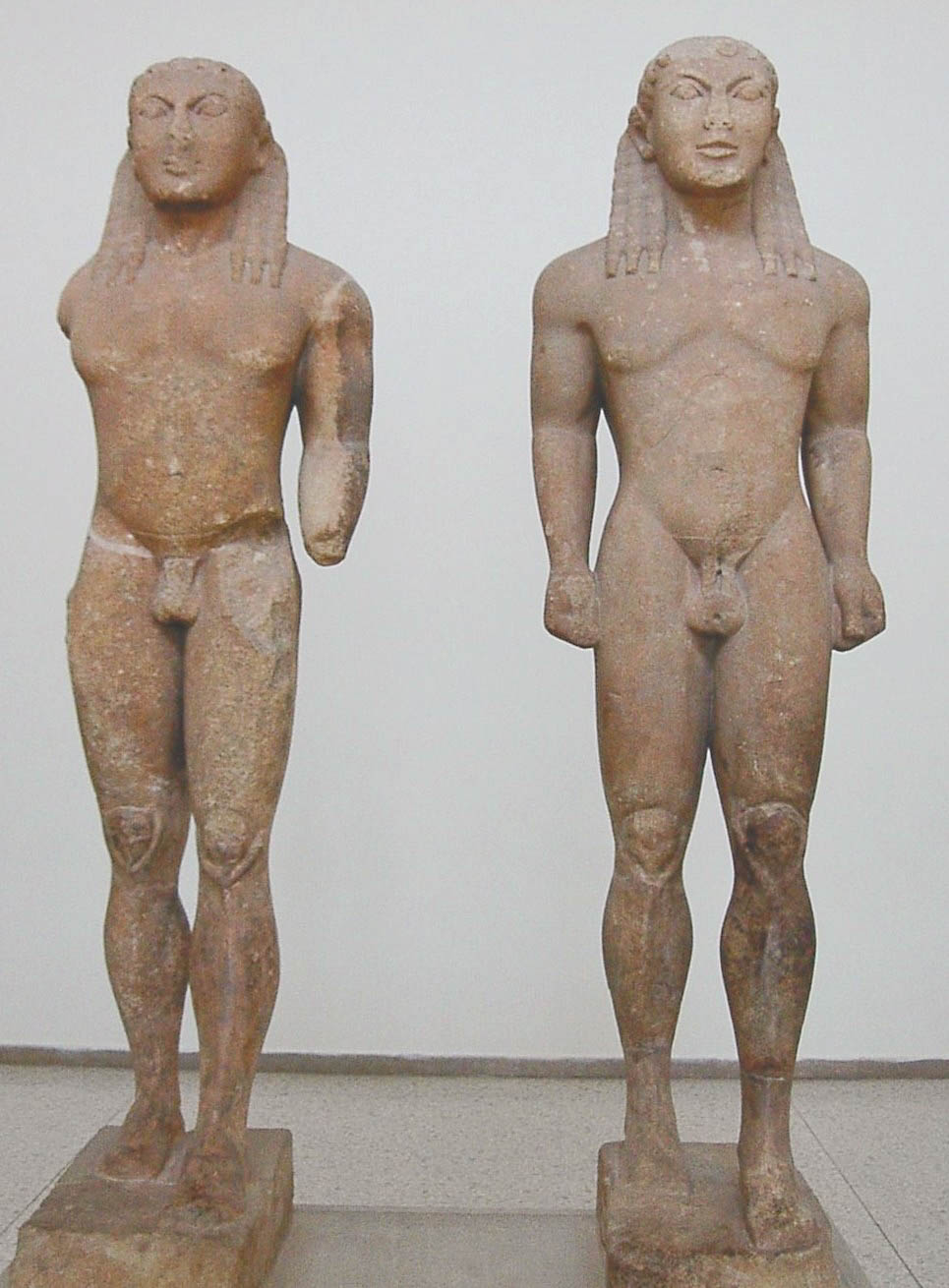 No opinion concerning the [kouros'] "meaning" has found universal acceptance... Virtually all agree, though, that it represents the man in his late teens and at the peak of his bodily powers, his hebe or akme, responding to the very Greek conviction that:

We are as leaves in jewelled springtime growing
That open to the sunlight's quickening rays
So joy in our span of youth, unknowing
If god shall bring us good or evil days
Two Fates beside you stand; the one has sorrow,
Dull age's fruit; that other gives the boon
Of death, for youth's fair flower has no tomorrow,
And lives but as a sunlit afternoon.
-Andrew Stewart - Art, Desire and the Body in Ancient Greece
440 BC: Doryphoros (C) 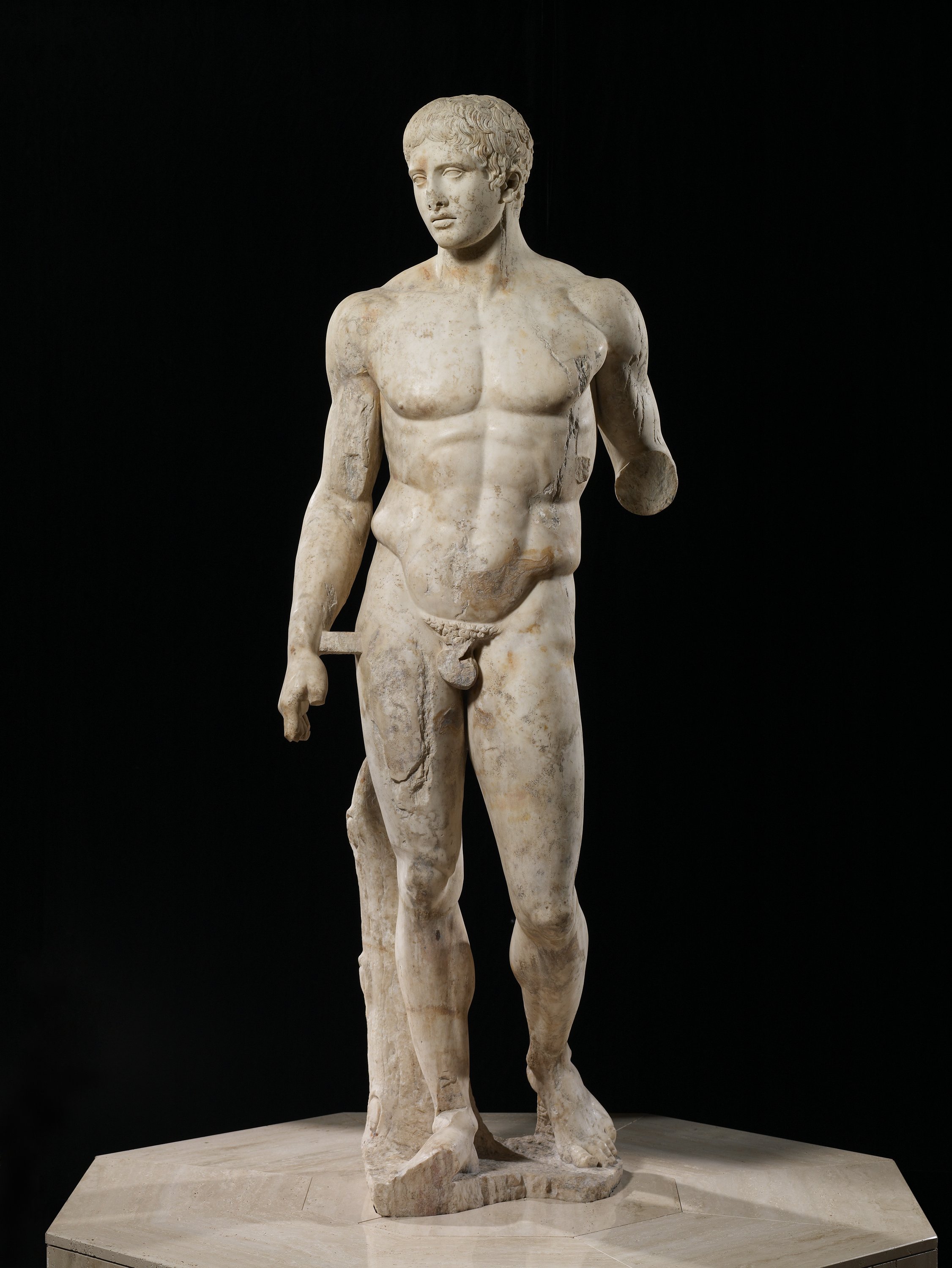 "But modern critics have sometimes homed in on anatomy at the expense of the Doryphoros’ synthetic pose. True, the various muscular tensions and relaxations correspond in some ways to those of a real figure. This particular position, however, is an artificial construction: it brings together an assemblage of schematic parts, arranging them according to a physically impossible aesthetic of opposition. Quintilian recognised as much in the first century AD: that Polyclitus bestowed the human body with a form that went beyond the real." Michael Squire - The Art of the Body: Antiquity and Its Legacy 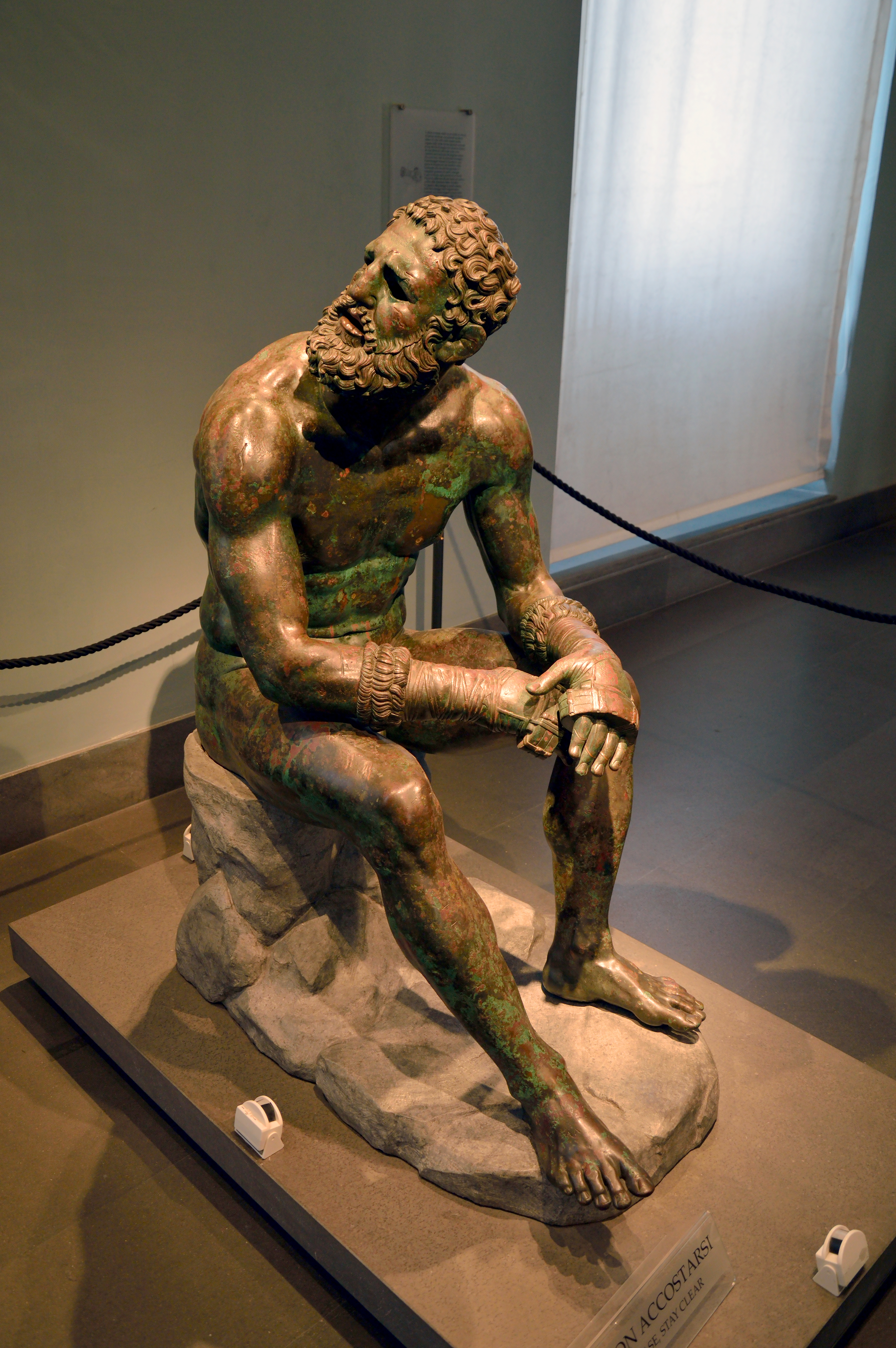 460-450 BC: Discobolus (C)
"Beauty varies with each age. In a young man, it consists in possessing a body capable of enduring all efforts, either of the racecourse or of bodily strength, while he himself is pleasant to look upon and a sheer delight. This is why the athletes in the pentathlon are most beautiful, because they are naturally adapted for bodily exertion and for swiftness of foot." Aristotle - Rhetoric 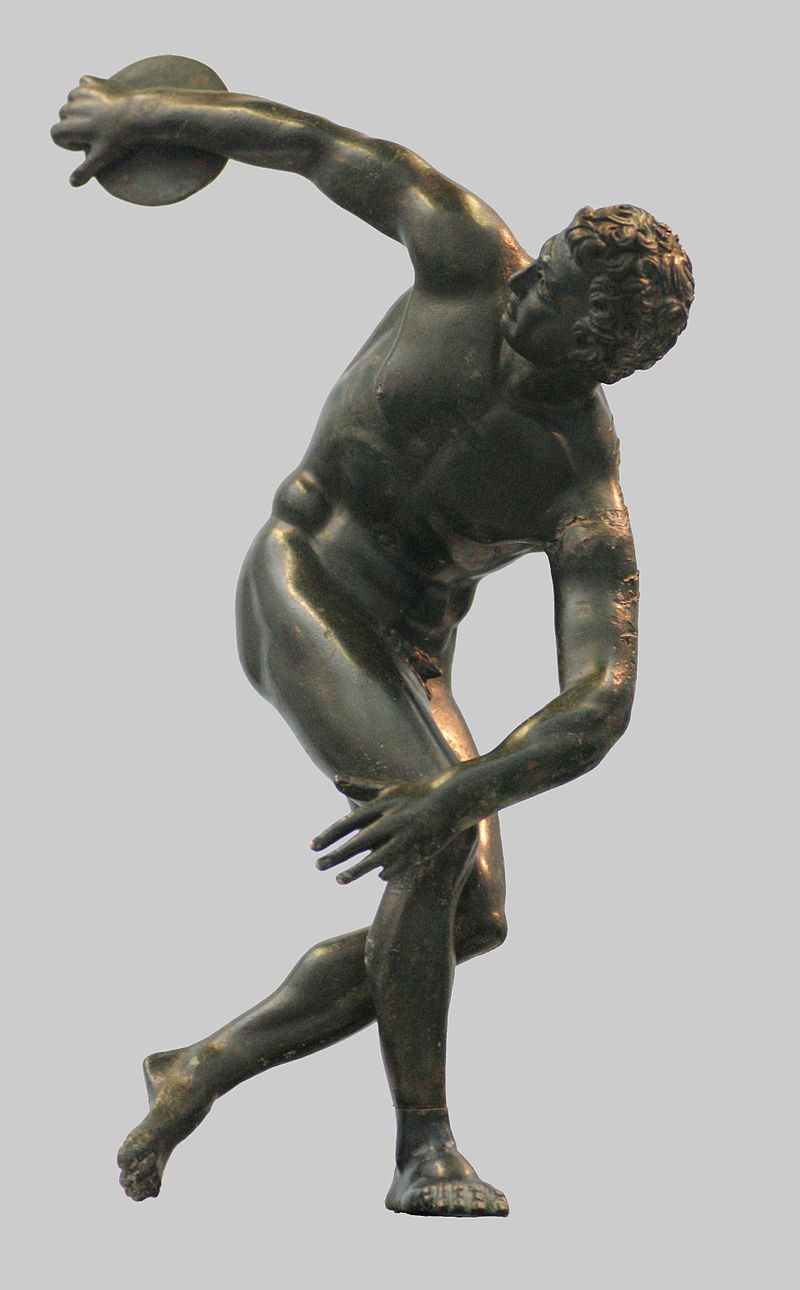 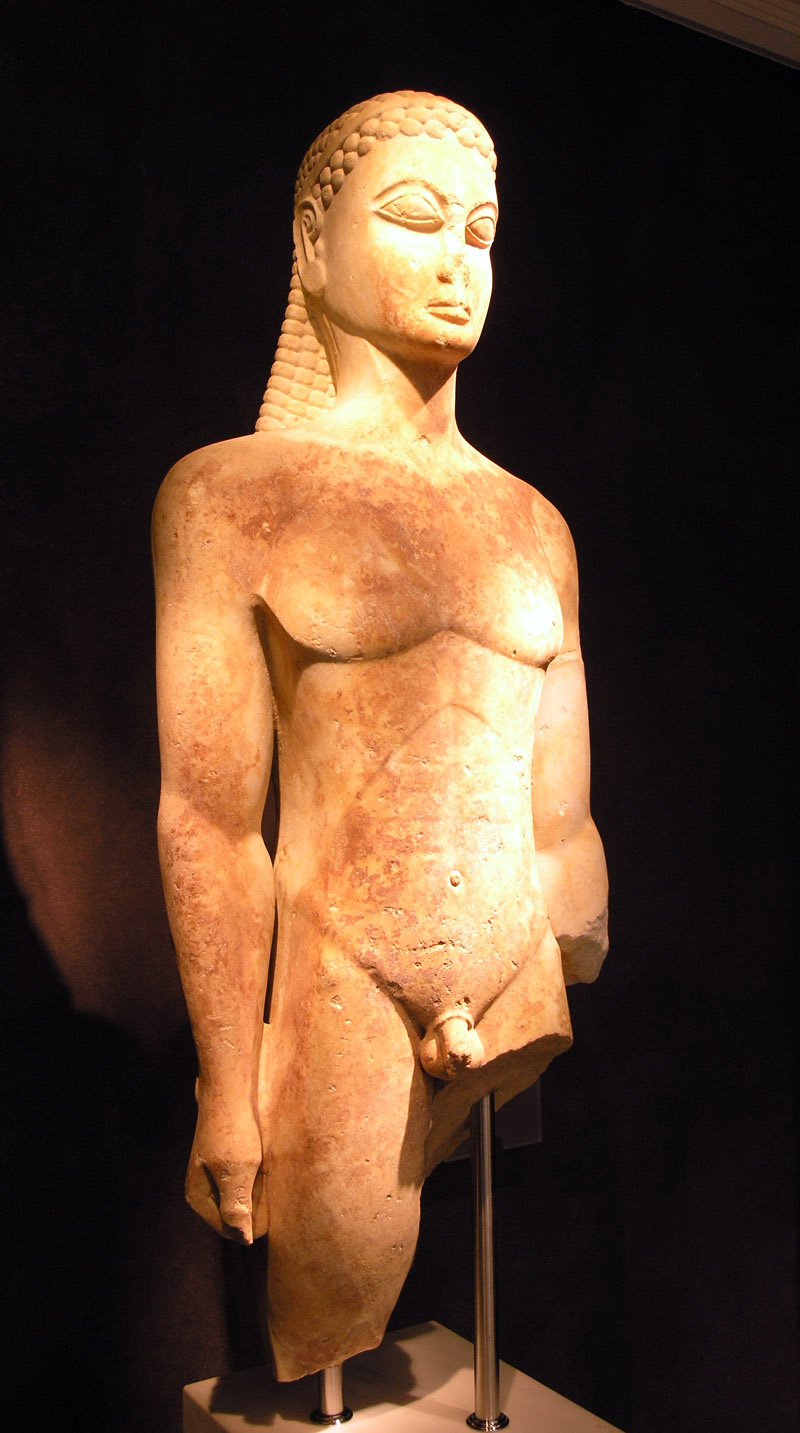 In these [Hellenic] works, the human frame has all but reached the limits of its development. Torsos and limbs are massive, bones are gigantic, muscles bulge with phallic energy, and skin is iron-hard. Furthermore, all liberally quote the masterpieces of the past as if by expropriating their bodies and their impeccably classical pedigrees for their own ends. So just as Doryphoros can be read as a microcosm of the ideal polis, these bodies with their exponential increase in size, strength, and implied phallic potency metaphorize the strident hellenism, hugely increased power, and thrusting ambition of the institution that had subsumed it: the hellenistic kingdom. -Andrew Stewart - Art, Desire and the Body in Ancient Greece
600 BC